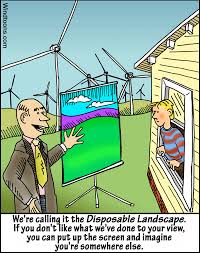 More ammunition has arrived for those fighting the march across our landscape of ugly,bird-destroying, subsidy gobbling wind turbines which generate "free power" at huge taxpayer's expense.
A report in 1987 for the US Department of Energy found people reacted to low frequency noise and became "more sensitive over time".

American researchers used mock homes, big speakers and seven volunteers to simulate and measure the impact of low-frequency noise produced by early model, two-blade wind turbines under controlled conditions.
A November 1987 report prepared for the US Department of Energy said the impact of low-frequency noise generated by wind turbines was often "confined to within surrounding homes" and that residents became more sensitive to the impact over time.
The laboratory experiments found that "people do indeed react to a low-frequency noise environment".
The study, A Proposed Metric for Assessing the Potential of Community Annoyance from Wind Turbine Low-Frequency Noise Emissions, was prepared in response to earlier research into "acoustic disturbances" associated with the operation of a wind turbine near Boone, North Carolina.
It found that the standard A-weighted measure for sound was "not an adequate indicator of annoyance when low frequencies are dominant".
The research was sent by an American acoustics expert to Australian wind health campaigners and has now been published internationally.
The US report built on earlier research by two NASA facilities and several universities. It was presented to the Windpower 87 Conference & Exposition in San Francisco by physicist ND Kelley from the Solar Energy Research Institute in Golden, Colorado.
The wind industry claims that the old research is not relevant to the newer turbines however this is disputed by the anti-wind lobby.
"The (US) research is highly relevant, even though the acoustic emissions themselves are different between old downwind turbines and upwind ones, where the turbines turn around to face into the wind," Waubra Foundation chief executive Sarah Laurie said.
"What is important is the impact on the people from the sound energy emitted from the respective wind turbines, how it is experienced by them inside their homes and the acknowledgement that the symptoms are real, and that the symptoms may be perceived but not heard," Dr Laurie said.
Health campaigners said the results of the laboratory simulations in the US study proved there was a direct cause-and-effect relation between the low-frequency noise and "annoyance".
The National Health and Medical Research Council has said there was no published evidence linking wind turbines to health impacts. The NHMRC is conducting a review of its advice but its updated report on the issue is now overdue. The South Australian Environmental Protection Agency has recently completed a major sound monitoring program at Waterloo where there have been significant complaints from residents, but the results are not yet available.
Posted by Baron at 5:16 AM