Aussie Summer has been hot but..

This map shows that 2017 has been hot but not unusual . It should be noted that this graph does not include data from the 1896 heat wave when temperatures topped 50 degrees. This is because it was removed from the BOM record because the data was "unreliable" not because as some cynics would think that it made a nonsense of global warming's "unprecedented warming". It should be noted that over 200 people died in the 1896 heat wave attesting to it's severity. 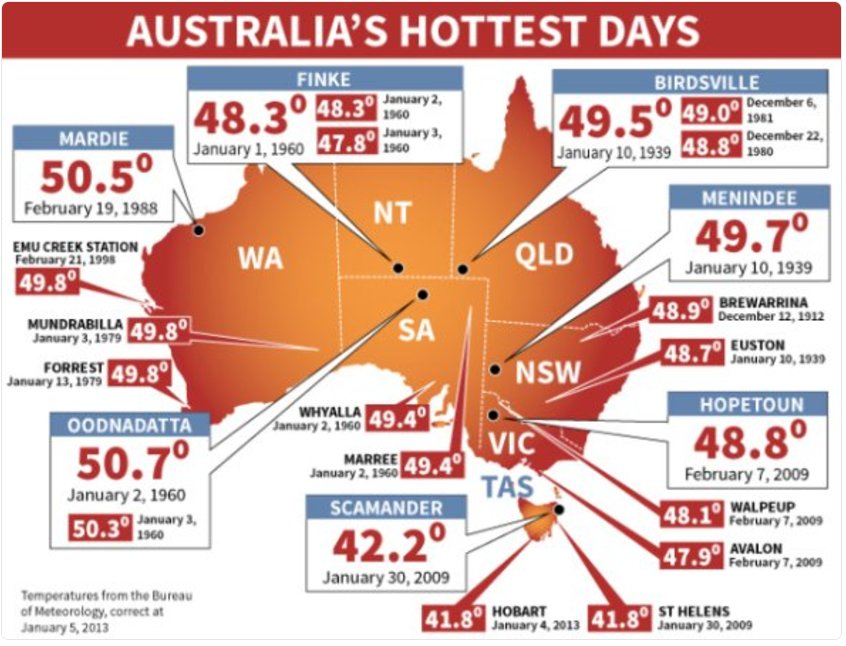 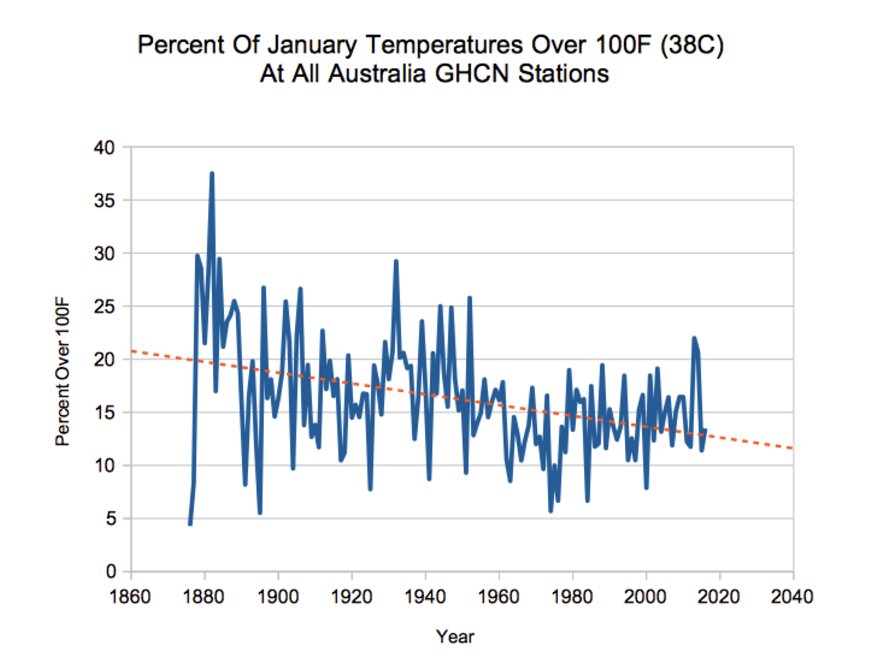 Arctic Ice Scam - the bits they don't show you.

From Real Climate. Steve Goddard has appended historical data to the satellite record which is the bit alarmists use to hysterically claim global warming is melting the Arctic. Unbelievable that so-called scientists can ignore real data. 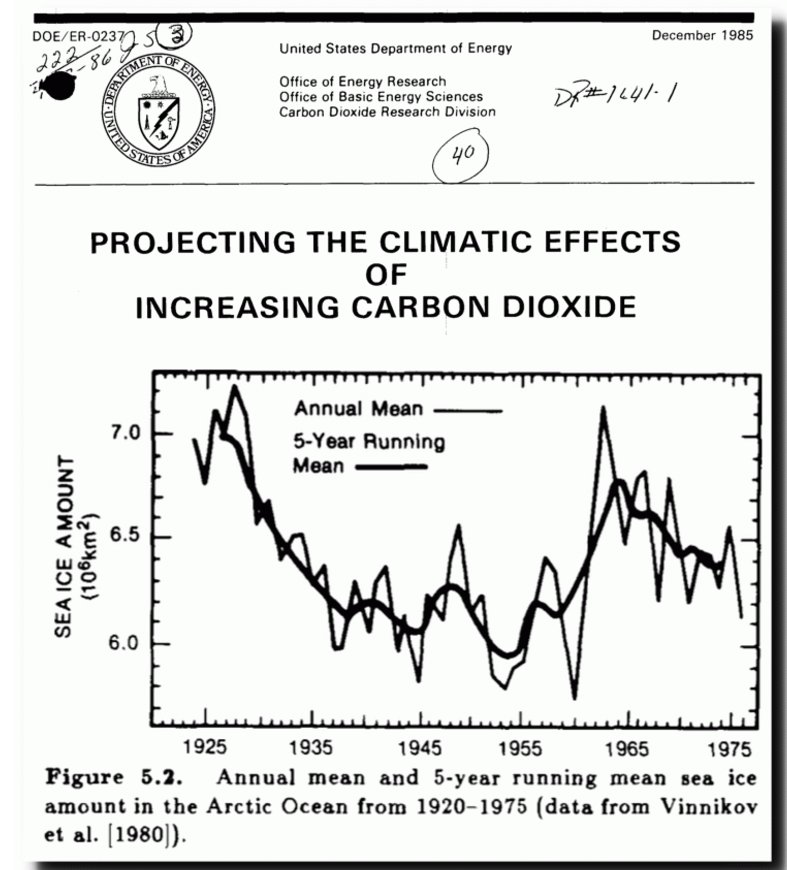 Official US Government research graphs that show that Arctic ice was about the same in 1945 and 1960 as the present level ,giving the lie to climate scammers claims about unprecedented melting. The Orwellian manipulation of climate data is about to end when the climate swamp is drained in the US.
Current climate graphs ignore earlier data to give the impression of continual ice loss. Note the graph below starts around 1980. 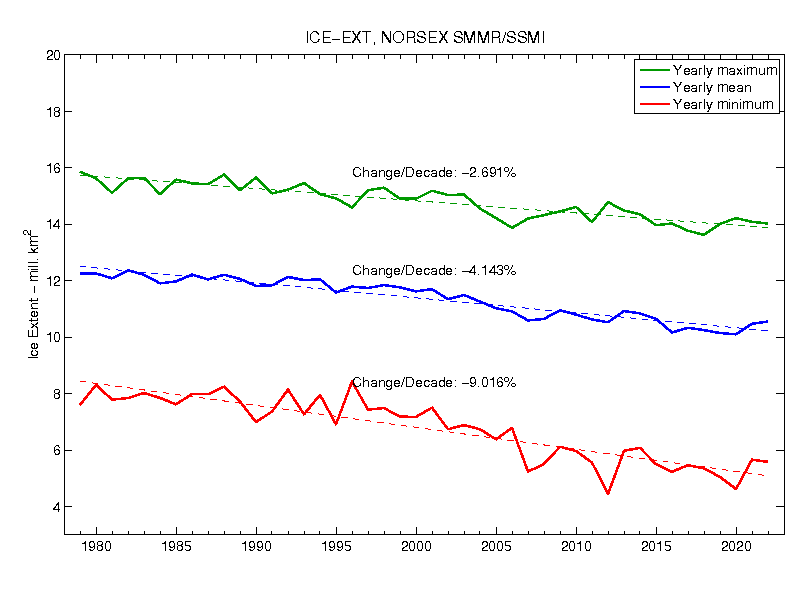 A court in Austria has blocked construction of a third runway in Vienna on the basis of increased CO2 emissions. The idiocy of such a decision is breathtaking. Will this reduce the number of people coming? No! Will the number of planes be reduced ? No! Will travelers be inconvenienced? Yes!
These legal morons are denying the reality of modern air travel .
The Local in Austria has the story:

A court has blocked Vienna airport's plans for a third runway saying it would have resulted in greater greenhouse gas emissions, in a verdict described by lawyers as a first.
Austria's Federal Administrative Court said in a ruling published late on Thursday that the "positive aspects of the project cannot justify the high extra carbon dioxide pollution."
A third runway would result in a "significant" rise in greenhouse gas output, contravening the country's domestic and international undertakings to reduce emissions, a statement said.
"The airport's possibilities to reduce CO2 emissions through its own measures (such as the installation of solar panels and changing its vehicles to electric cars) were insufficient," it added.
"As far as I know this is unique that climate protection is used as an argument to block a concrete plan," Christian Schmelz, a lawyer for the airport, told the newspaper Die Presse.
Erika Wagner, head of the Environmental Law Institute at Linz University, called it a "landmark ruling".
Posted by Baron at 7:01 AM 17 comments: Links to this post Climate skeptics have always known that the temperature data held by NOAA was completely dodgy with temperatures in the past being lowered to create an artificial warming graph. We now have a whistle-blower pulling the plug on the shenanigans of the climate "scientists"at NOAA - the major repository of "climate data" in the world. I think this will be the first of many as the climate scam crumbles.  The Daily Mail broke the story:


The Mail on Sunday today reveals astonishing evidence that the organisation that is the world’s leading source of climate data rushed to publish a landmark paper that exaggerated global warming and was timed to influence the historic Paris Agreement on climate change.

A high-level whistleblower has told this newspaper that America’s National Oceanic and Atmospheric Administration (NOAA) breached its own rules on scientific integrity when it published the sensational but flawed report, aimed at making the maximum possible impact on world leaders including Barack Obama and David Cameron at the UN climate conference in Paris in 2015.
The report claimed that the ‘pause’ or ‘slowdown’ in global warming in the period since 1998 – revealed by UN scientists in 2013 – never existed, and that world temperatures had been rising faster than scientists expected. Launched by NOAA with a public relations fanfare, it was splashed across the world’s media, and cited repeatedly by politicians and policy makers.
But the whistleblower, Dr John Bates, a top NOAA scientist with an impeccable reputation, has shown The Mail on Sunday irrefutable evidence that the paper was based on misleading, ‘unverified’ data.
It was never subjected to NOAA’s rigorous internal evaluation process – which Dr Bates devised.
His vehement objections to the publication of the faulty data were overridden by his NOAA superiors in what he describes as a ‘blatant attempt to intensify the impact’ of what became known as the Pausebuster paper.
His disclosures are likely to stiffen President Trump’s determination to enact his pledges to reverse his predecessor’s ‘green’ policies, and to withdraw from the Paris deal – so triggering an intense political row.

A judge who hasn't drunk the Green Koolaid shocks Greenies!

Environmentalists, expecting a free pass after tampering with a pipeline were shocked when when a judge said that catastrophic global warming was "controversial". With Trump in charge expect more of the same bringing the climate bed-wetters out in force!
The National Post has the story:
A jury was selected in Washington state on Monday in the first trial over a coordinated protest that disrupted the flow of millions of barrels of crude oil into the United States, a proceeding activists hope will serve as a referendum on climate change.
Activist Ken Ward says he will not dispute that he shut down a valve on the Kinder Morgan Inc’s Trans Mountain Pipeline near Burlington, Washington, but he will testify that such actions are necessary in the face of the government’s failure to address global warming.

Judge Michael Rickert has barred Ward’s lawyers from formally mounting a “necessity” defence or arguing that his actions were justified in light of a looming environmental crisis.
“I don’t know what everybody’s beliefs are on [climate change], but I know that there’s tremendous controversy over the fact whether it even exists,” Rickert said. “And even if people believe that it does or it doesn’t, the extent of what we’re doing to ourselves and our climate and our planet, there’s great controversy over that.”
Posted by Baron at 7:56 AM 10 comments: Links to this post